Mr. and Mrs. Lambert, owners of a villa built in 2009 in Haute-Savoie, decided to couple the MyDATEC thermodynamic CMV with a Canadian well. They testify:

By deciding to combine the concept of the Mr. and Mrs. Lambert have a double objective: to save energy and to ensure an optimal thermal comfort with a good air renewal inside the house. 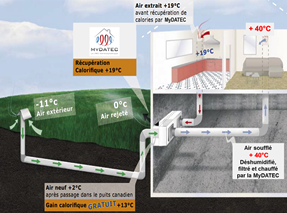 The principle of the Canadian well consists in heating the new air in winter and cooling it in summer (for this application, it is also called Provençal well) by making it transit in a largely dimensioned duct, buried in the ground on a linear of approximately 10 to 20 meters.

The Canadian well is a perfect complement to the thermodynamic double flow ventilation system, especially in regions with large temperature differences (very cold areas or very hot areas). The latter has the ability to “smooth out” the temperature peaks according to the season. The more stable the incoming air temperature is, thanks to the Canadian well, the better the performance of the MyDATEC thermodynamic ventilation system.

Mr. and Mrs. Lambert: ” If we had to do it again, we would do it without hesitation. “

Why did you choose a thermodynamic solution?

” We had an efficient heat pump system in our old house and it seemed obvious to us to choose the same concept for our new house but using today’s technologies for even more performance. The MyDATEC concept, having seen it work with friends, proved its effectiveness. “

How was MyDATEC coupled with the Canadian well?

” The system of the Canadian well requires to have a ground wide enough to dig on at least 10 meters length. It is easier to do this type of design during construction. Living in Haute-Savoie, it appeared to us as essential to take advantage of the free heat contribution underground. That’s why we chose to combine the two principles from the very beginning of the design process and we don’t regret it. “

In concrete terms, how would you describe the comfort of the house with a double flow ventilation system and a Canadian well?

” A comfortable temperature all year round with renewed air as a bonus. The temperature of the new air entering in winter through the well is almost always positive, as the air blown in by the MyDATEC RT300V thermodynamic ventilation unit gains about 30°C, our thermal comfort is 100% ensured by the Canadian well / MyDATEC* couple..”

What is your opinion on the system?

” First of all, we appreciate the substantial energy savings made by the system. But also to the fact of feeling good at home with new air, dehumidified and at the right temperature. Another point: ecology. We are concerned about greenhouse gas emissions, the system is non-polluting and the electrical energy required to operate it is derisory compared to its efficiency. Finally, we were happy to buy from a 100% French manufacturer. “

*In our example, the house of Mr. and Mrs. Lambert is a passive house with very little heating needs

*The names of the witnesses have been voluntarily changed