At the end of 2007, the non-reversible Aeroplast 500 heat pump, which had been installed in my house since 1979, was beginning to show signs of fatigue, so I decided to look for a replacement.

While searching on the internet, I discovered the GAC MyDATEC website which proposed the RTR 3000 DATEC (RTH MyDATEC) whose characteristics interested me and in particular the possibility of cooling the air.

This website has pleasantly appealed to me and particularly by the completeness of the headings to be filled in the specifications: “This company must be serious! “I thought. So I filled in and sent the email, and then started researching the data to write the CDC.

Shortly after my e-mail, I had a first telephone contact with Mr. FAURITE which allowed us to discuss this project at length.

Then, I sent to the GAC MyDATEC company a file containing the duly completed CDC, as well as the plans of the old heat pump, the installation constraints, and a proposal for the installation of the RTR 3000 DATEC (RTH MyDATEC).

After studying my file, the MyDATEC sales representative contacted me to validate but also to modify certain details and in particular: the need to increase the existing section of the outside air intake.

Then I received a detailed commercial and technical proposal.

Having decided to install the RTR 3000 DATEC myself (RTH MyDATEC), several telephone contacts took place, and in all cases, the MyDATEC sales representative took the time necessary to answer me, and moreover, always provided adequate explanations to my questions.

In March 2008, I concretized the project by ordering and I was delivered, within the agreed time, by a carrier. The pallet contained all the equipment duly labeled and marked in order to facilitate the assembly without forgetting the instructions and the electrical diagram.

The installation of the RTR 3000 DATEC (RTH MyDATEC – different from the old Aeroplast heat pump) required some adjustments in the attic (floors, connections …) with the advantages of good ergonomics for assembly and maintenance and the absence of vibrations, because the RTR 3000 (RTH MyDATEC) is suspended by cables from the roof structure.

When I turned on the power, I had 2 electrical failures: on the thermostat and on the by-pass which required the intervention by phone of GAC MyDATEC). The troubleshooting tests, carried out with the technician on the phone, revealed the failure of the thermostat requiring its replacement (received by parcel 3 days later) and on the by-pass: insufficient contact on the shutter limit switch, requiring a more important bending of the limit switch blade.

I would like to thank the MyDATEC technician for his responsiveness and competence during the telephone troubleshooting.

As a feedback on this point, for myself (which was done, see photo) and for you, I recommend the installation of a switch near the RTR 3000 DATEC (RTH MyDATEC), to cut the general power supply, when the circuit breaker of the electrical panel is far away: because hello to the many trips back and forth between the basement and the attic !!!

After commissioning, it was necessary to reduce the supply air flow in order to reduce the noise at the vents. This required: the addition of switches on the control box and a modification on the connection of the supply fan. All the material necessary for the operation was provided free of charge by GAC MyDATEC, the installation being carried out by me.

I would also like to clarify a point that seems important to me: the concomitance of a closed fireplace or similar and the RTR 3000 DATEC (RTH MyDATEC). In double flow, it is not necessary and not recommended (for energy reasons) that the windows have air inlets. However, when the RTR 3000 (RTH MyDATEC) is in the OFF or ON position during defrost, the supply fan does not operate. There is thus a deficit of air in the house which results in a “siphoning” of the air from the chimney flue causing either soot odors when the chimney is not lit, or problems with the lighting (smoke spreading in the room). The remedy consists of: either forcing the double flow (this has been achieved by modifying the supply flow: see paragraph above), or remaining in double flow, but this solution is not always optimal, especially in periods of extreme cold, the supply temperature is lower. In summary, the presence of a chimney requires special attention in the management of air flows to avoid discomfort.

After almost a year of operation, I can see that the RTR 3000 DATEC (RTH MyDATEC) is more efficient than my old Aeroplast heat pump (even in its infancy) because, in fact, the supply temperature is much higher, which ensures, among other things, excellent ventilation but especially many days of full heating in the off-season with only the RTR 3000 DATEC (RTH MyDATEC) In addition, when it is very hot, it diffuses cooled air, providing gentle air conditioning that is sufficient for comfort.

To conclude, I would say that the RTR 3000 DATEC (RTH MyDATEC) is a good product, designed, produced and implemented by a very competent and responsive team, whose primary concern is customer satisfaction. 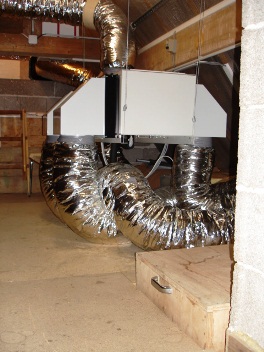 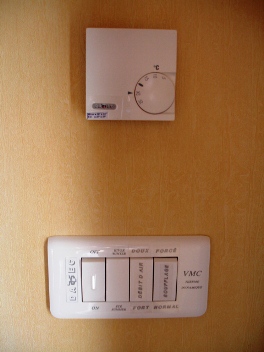