Your home is loaded with heat from multiple sources

This air loaded with heat energy is generally polluted, and it must be evacuated by rejecting it outside to replace it by new air, coming from outside. This is the principle of ventilation.

Better than a double flow, a new generation of CMV…

While a classic double flow system passively recovers part of the heat contained in the extracted air before rejecting it outside, the MyDATEC thermodynamic ventilation system recovers the heat power of the extracted air, which allows it to actively regulate the temperature of your home.
The system feeds on the heat extracted from the dwelling for the needs of ventilation, wrings out the calories by a patented system of PAC on extracted air and gives them back to a healthy and clean air, before diffusing it in the whole house.

Thanks to its heat pump on reversible extracted air, the MyDATEC thermodynamic CMV can also bring a cooling power to your house via the ventilation network.
Thus, MyDATEC provides heating and cooling power to maintain comfort conditions inside the house, while remaining an ecological solution based on renewable energy.

Principle of a heat pump 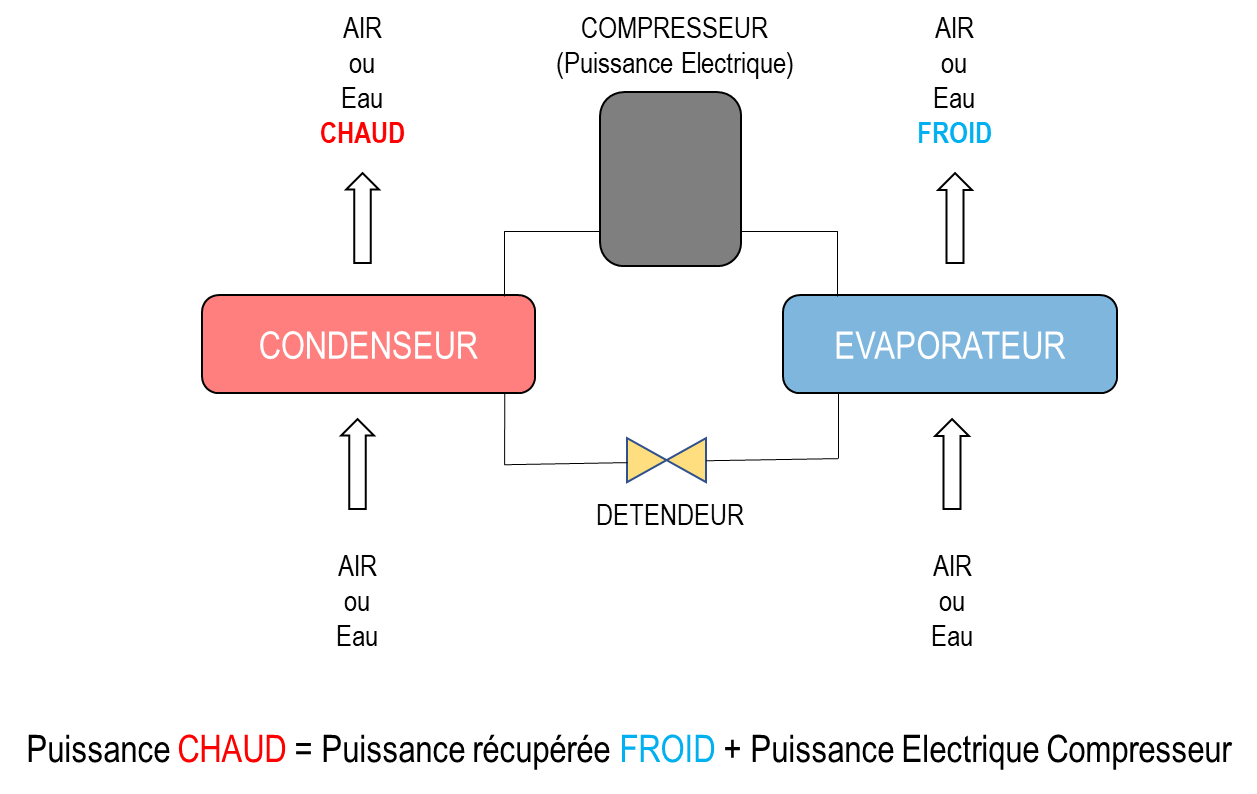 Definition of a heat pump

A heat pump or PAC is a thermodynamic device that takes heat from one medium (e.g. air, water, earth) to transfer it to another (e.g. in a home to heat it). The refrigerator is the best known heat pump system. A reversible heat pump will produce coolness in summer and heat in winter.

There are 3 main types of heat pumps:

Inside the MyDATEC thermodynamic unit, the first air flow (Extraction -> External discharge) passes through an “evaporator” heat exchanger battery. The air flow transfers the heat contained in the air to the heat transfer fluid of the thermodynamic cycle. The air flow of a temperature of approximately 20°C at the extraction is rejected, after having given up its calories, towards the outside at a temperature of approximately 2°C.

The use of a heat pump system, with a thermodynamic cycle, allows, contrary to the static double flow system (with static exchanger) to heat the incoming air to a temperature higher than the temperature of the extracted air (20°C) of the dwelling allowing to ensure, according to the losses of the dwelling, all or part of the heating need

The difference between MyDATEC and other PACs

Unlike other systems, MyDATEC uses the air extracted from the home for ventilation purposes. This source of energy is renewable, since if it were not reused, it would be lost, and above all, this source is naturally warm (about 20°C all year round) and rich in moisture! Everything a heat pump loves! That’s why MyDATEC’s returns are so spectacular. On the other hand, the source used by MyDATEC, the extracted air from the ventilation system, is limited: heat recovery from the extracted air is of no interest if there is no need to ventilate! This is why the power supplied by MyDATEC is limited (up to 3 kW for the heat pump) whereas an air-to-air heat pump could provide unlimited power.